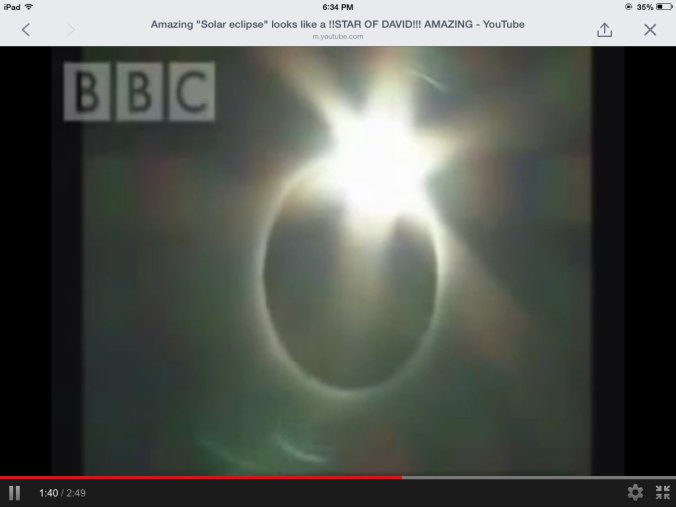 Just another sign of the times. Jesus said before the great and notable day that there would be signs in the heavens.

The two greatest signs we have today are the heavens and Israel. God spoke by the prophet Jeremiah that in the latter days, that he (God) would not be known anymore as the God who delivered Israel out of Egyptian slavery but will instead be known instead as the God who restored Israel back to her original Homeland! This is the First Nation in history to have her homeland restored. I have written of the calamities that have faced those who have attempted to wrest land away from Israel. Here is a link if you are interested. EZEKIEL 37
http://www.amazon.com/dp/0578097249
If you follow my blog, you will receive updates as to Jerusalem prophecies.
Shalom!

When the Obama administration decided to freeze out the Prime Minister of Israel, Benjamin Netanyahu upon his arrival to address both houses of Congress in early March, another chilly reception seemed to form for America’s  NorthEast.  This wintry weather is breaking century old records and is showing no signs of letting up just yet.

I have written extensively about the correlation between the United States’ official foreign policy towards Israel and the reactionary unprecedented storms that supernaturally occur Shortly thereafter.     It should be noted that the response nearly always is eerily related to the offence toward Israel.

The promise to bless those who bless Israel and curse those who curse her is not a coincidental response but a carefully crafted truth as a result of the Word of the Lord spoken through Israel’s ancient prophets going back to the father of their faith, Abraham.

Believing it or not will have no impact upon the reward or failure of nations who take action towards Israel. Iran, who has sworn an oath publicly to destroy Israel from off the map has seen the largest lake in the Middle East nearly disappear. Lake Oroumieh in Northwestern Iran could possibly be completely gone in two years according to experts.

The recent chilly reception given the Prime Minister of Israel by the Obama Administration has been noted in Heaven by her sworn Defender and Protector.   Follow this blog to RECIEVE  pertinent current events related to biblical prophecy.

According to diligent documentation for the past years, this could be another one of those weeks in America where we are glued to our news networks as a major catastrophe unfolds.   Reason: John Kerry, sec of State in Israel to discuss Jerusalem among other things especially at the Saudis behest.  Tampering with Israeli sovereignty regarding her land has almost 100% brought a major reaction from the God we have promised to trust.   Please pray for America.

Discover one of the most relevant and up to date books written on the subject of Jerusalem.  A current event/ prophetic book that affords a riveting documentary of diplomatic cause and effect.
For more: http://www.createspace.com/4402007

Having a working knowledge of Jerusalem and how it relates to the well-being of our nation is the reason ” Jerusalem X Factor- the End Game,” is a must read!  Reverend Cuevas takes the current events such as Super Storm Sandy, Bengazi, and the Boston Bombings just to name a few and allows the reader to formulate his/her opinion as to consequential Middle-East peace negotiations.  The ancient scrolls along with historical data contained in this book will inform the sincere reader.  Written in an uplifting manner, the book will leave you with a greater appreciation for Israel, a keener sense of our profound relationship with her as a nation, and most likely a desire to visit some day.    Although Law and Marketing professors highly commend this book with rave reviews, it is written in an easy conversational style that makes it an enjoyable read!

A second edition of new book is out this week!   Jerusalem X Factor- the END GAME has just been made available for those Believing Saints who desire to be better informed of the news and current events from a Biblical standpoint.

This is an easy to read book written in a conversational style after nine years of documentation.

Type above URL to purchase through amazon/ createspace

READ this amazing article about the White House and how it erased Jerusalem as part of Israel in a prepared official video of President Obama’s trip to the MiddleEast.http://www.wnd.com/2013/03/white-house-map-of-israel-erases-jerusalem-biblical-territories/

UPDATE:  Presidential limousine broke down.   President Obama’s vehichle nicknamed,  “The Beast,” due to the bells and whistles broke down at 10 A.M. Jerusalem time in Tel Aviv where it was to pick him up and bring him to Jerusalem.   According to the article above… How can you be safely and smoothly be driven to a city that you declare does not exist in the possession of the Host Country you are visiting.   Apparently the driver filled the tank with gasoline instead of desiel fuel.  Helicopters sent to get the job done.

There are in the Hebrew language no words for “Coincidence.”  The concept that things just happen for no good reason is a man-made concept.

For instance, the Apostolic figure Paul of Tarsus says, “All things work together for good to them that love G-d and are called according to His purposes.”

While former President Jimmy Carter was in Israel on October 22, 2012, one part of a tri-fold storm formed off the coast of Africa named “SANDY.”

Lambasting Israel for the plight of the Palestinians and threatening to give the Palestinians a foothold in the United Nations, the very same day Sandy was forming the first leg of a three-fold monter storm that attacked the Shores of New York and New Jersey.

Coincidence?  There are none in the Hebrew language and for over 7 years there are at least 15-17 nearly identical intstances documented in a new book, “Jerusalem X Factor.”

NC State Prof. Dr. Olin Wood stated in a recent book review:  ‘” Jerusalem X Factor” ought to be required reading for every leader in America.’